Below is the first test shot image when we tried ti remove the Micro Lens and CFA using optical polishing powder. The brightness of the micro lens removed area is quite a lot dimmer than the area with the micro lens and CFA still intact. 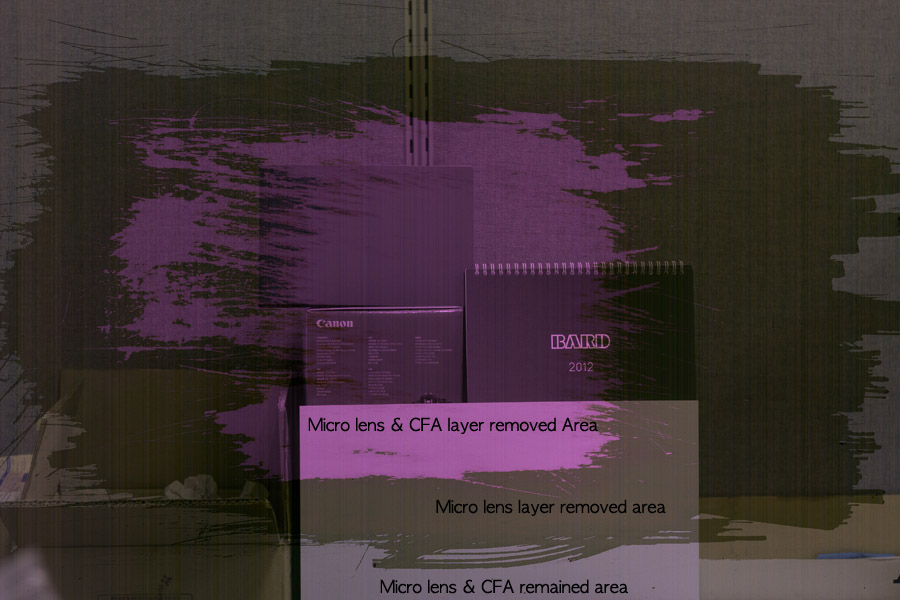 The Micro Lens removed area became a bright purplish monochrome image. The numerous vertical lines in the whole area are caused by the cut of gold wire that connects the CMOS wafer and external terminal.

Recently we have taken some test shots with the monochrome 60D with the CMOS and CFA removed by chiseling with  a bamboo chopstick.

To ensure equal conditions before and after, the Low Pass Filter was left in place after the CMOS was debayered.

1. These were converted by Adobe Camera Raw converter program and resized in Photoshop.

The color tones of the debayered image are not greyscale but purplish. Canon’s bayering algorithm was programmed to raise the color level of Blue and Red to equalise with the Green channel.

To help to understand the acquisition of the color data on the color image sensor, I will illustrate the basic sensor structure.

Actually each pixel records only the luminance and sends this data to the image processor. In the case of the color sensor, there is a color filter in front of each pixel. The recorded luminance data is the intensity of the light that has passed through this color filter.

The colors of the filters are Red, Green and Blue and are arranged in a 2 x 2 pixel pattern of G-G-R-B.

Below is the illustration of the layout of the Color Filter Array (CFA). For example if we look at R5 pixel, I will explain the color data generation algorithm. 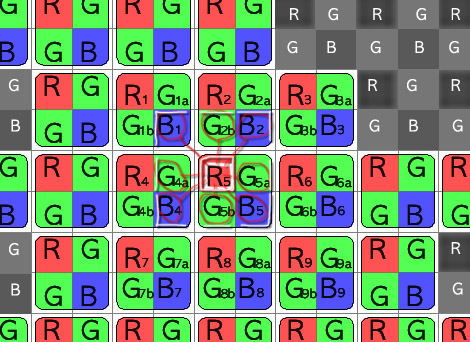 R5 pixel has the Red data and has no Blue or Green data.
At the surroundings of R5, There are four green pixels(= G2b, G4a, G5a, G5b) and we assume  the average light intensity of these to be 135.

At the surroundings of R5, There are four Blue pixels(= B1,B2,B4,B5) and we assume  the average light intensity of these to be 185.

This method of color creation can be applied to Green and Blue pixels too and thus the light that passes the CFA becomes full color data. This color creation method is very innovative but the borrowing of average color values from the surrounding pixels is not the true value and this method may produce false color.

To prevent false color it is essential to use an Optical Low Pass Filter (LPF) Because average color is generated from a 3×3 pixel area, loss of resolution is inevitable.

To compare the color images at the same conditions we changed the shadow level to that of the color image from Adobe camera raw converter program.
The magnified images of [Area 1.] are below. 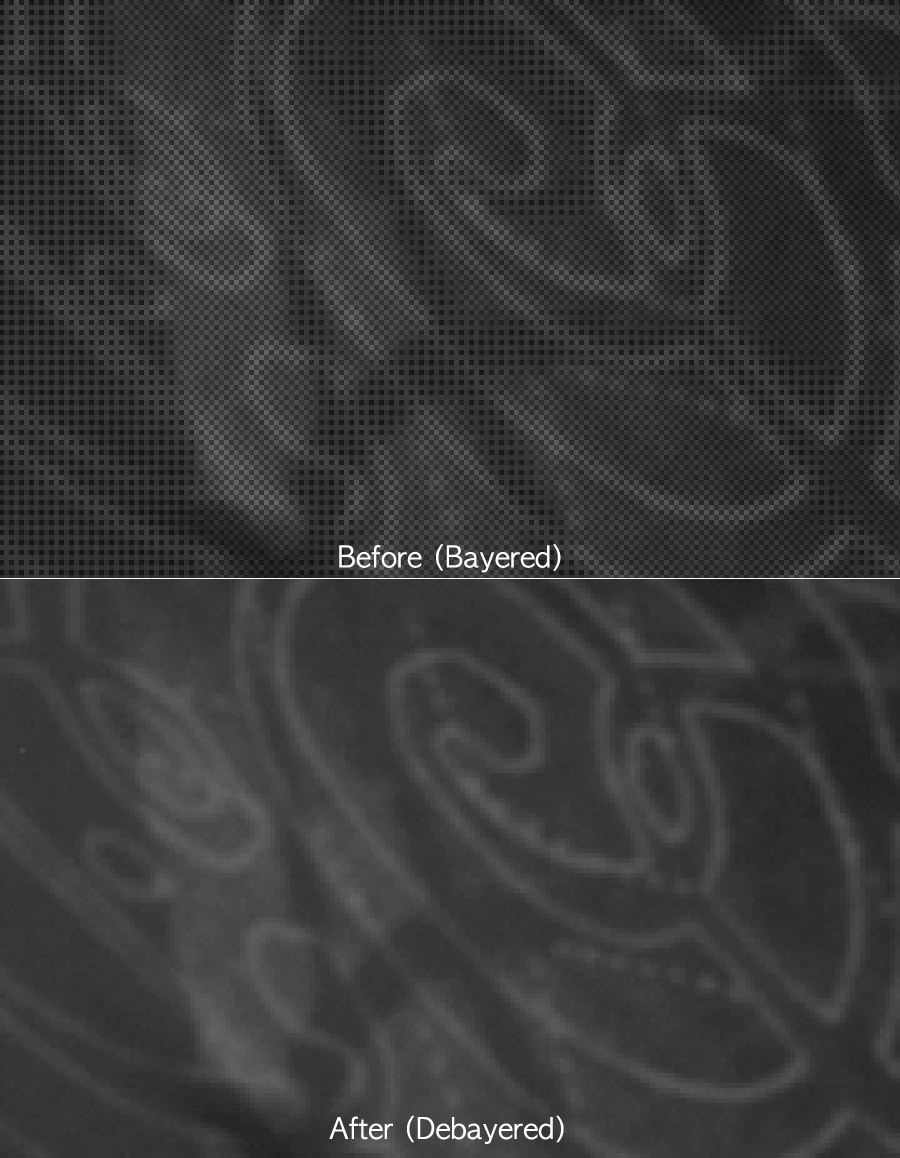 In the bayered image before modification of the CMOS, we find  diagonal pairs of bright Green pixels and opposite dark pixels of Blue, Red at white area .

In debayerd image adjacent pixels maintain the same brightness. This means that the light transmission of Blue and Red pixels was increased to match the level of the Green pixels.

To check the photo sensitivity of debayered CMOS, we’ve got the sample 5×5 pixels area of the same position and took the bright level values. The brightness range is 16bit levels and in 5x5pixels area of bayered CMOS we took the same colored pixels and average them.

In the case of the debayerd CMOS, the RGB channels are united into one and the bright levels become even. Therefore we have taken the average value of a 5×5 pixel area. 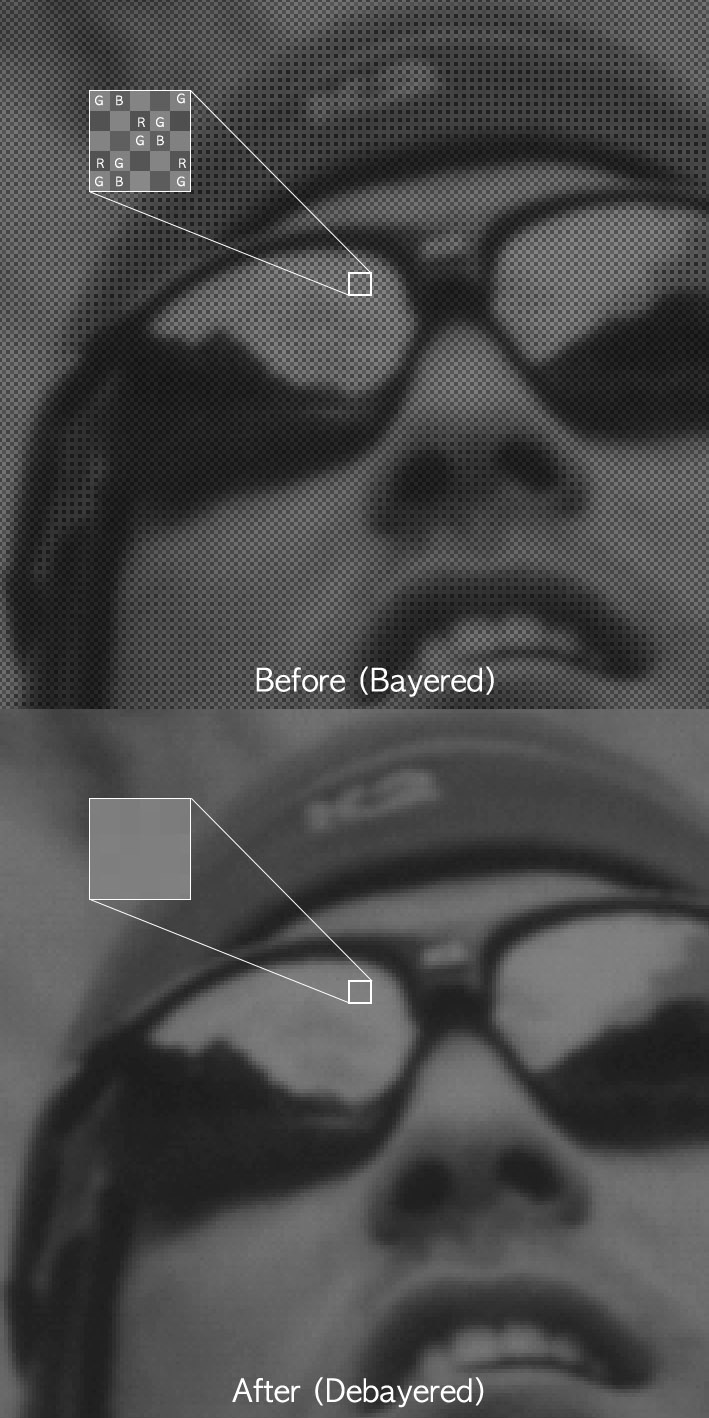 With this modification we have lost the micro lens layer and this results in serious loss of light gathering power. However the CFA removal gives us higher resolution and increases the sensitivity of the Red and Blue pixels to that of the Green.

The Optical Low Pass Filter in front of the CMOS stretches the image in X&Y directions to prevent false color and “Moire Pattern” but it also produces a lower resolution image.

In the case of a debayered image sensor, the OLPF must be removed to get the best sharp and detailed image. Monochrome image sensors without the LPF is the best way way to produce maximum resolution from a good OTA.

Next time we are to test the debayered CMOS without optical low pass filter and will post the results.