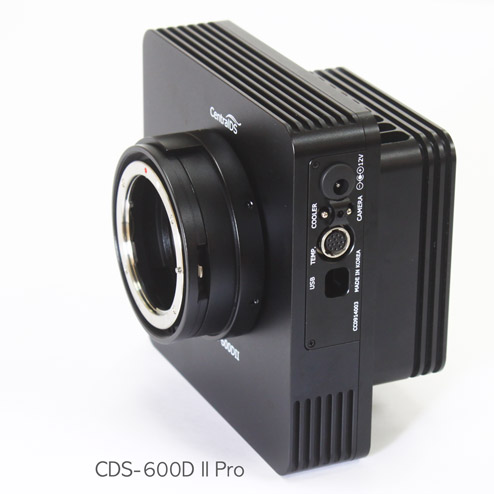 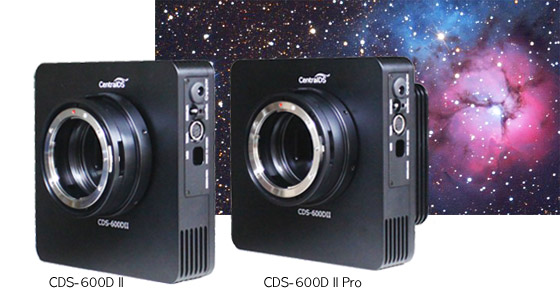 At last we launched the upgraded CDS-600D with new design as the name of CDS-600D II and CDS-600D II Pro with more powerful cooling.

Drop-In filter holder for 2 inch astronomical filters is equipped in these cameras.

CDS-600D is designed to be a remote controlled camera without LCD screen with only basic function of camera but it can dramatically enhance the image quality in low light photography.

650D and 700D are also having 18 Mega pixels and this are same to 600D’s. The major improvement of these latest models were made at the area of AF or Movie function or user interfaces. Long ago we deeply tested 650D and 700D compared to 600D and we found a astonishing facts that the 600D’s image quality is more stable and good with lower noise than that of 650D or 700D in case of low light, high iso, long time exposure photography.

After 650D, 700D launched, the price of 600D became more good and CANON did not discontinue 600D and we can easily buy it at the market until now. 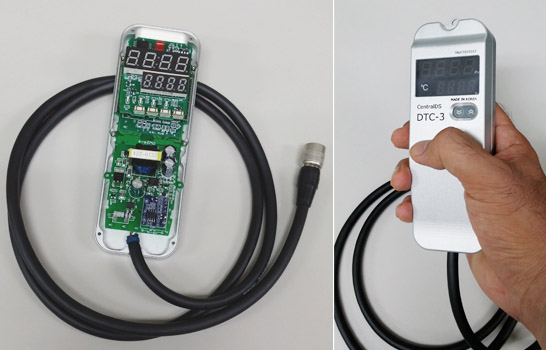 The module parts are compatible with CDS-5D and economical and consistent quality control and improvement will be possible.

There was a big loss and it’s mechanical shutter in front of imager sensor.

To equip the Drop-In filter system, there is needed the space between lens mount and Image sensor. We removed the shutter blades and moved the shutter body to the side of CMOS. And camera body was became a low profile body as that of CDS-5D and the space for drop-in filter holder was prepared. CDS-600D II was became [B shutter only ] camera like CDS-5D. But using USB connection to PC and control software(EOS Utility, BackyardEOS, etc.,) you can set the exposure time by 1 second.

In CDS-600D, we provided [movie mode/Manual Exposure Mode] selection Switch. We found that most users do not take [Movie] using CDS-600D camera. And when we  design CDS-600D II, we disabled [movie mode] and made this camera to only still frame camera for astro imaging.

Two types of cooler concept are in CDS-600D II,

One is a traditional full size cooler module like that of CDS-5D’s and another is simple and thin cooler module. 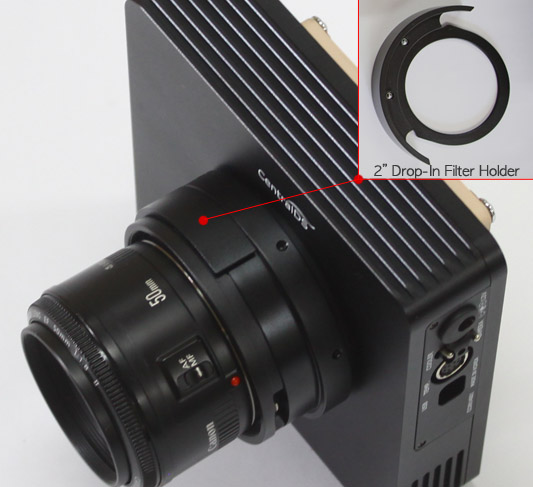 In order to prevent dew formations on image sensor, Hoya MC clear filer or UV/IR cut filter is used to seal the chamber to block outside air.

For instance, On CDS-600D, screw type was used to hold and change filters so in order to change filter and the screw type holder had to be detached and re-attached each time from OTA and lens which makes bit of tediousness on changing different filter.

CDS-600D II ’s improved filter mounting system allows a user to simply drop-in their filters while attached with lens or OTA. Since a filter goes in between Lens and imaging sensor, it’s possible to combine various optical systems with little efforts. A user is able to composite visible/infrared channels, Hydrogen Alpha (Ha) and Narrow Band channels easily where previously difficult to achieve.

An image sensor requires an exact perpendicular alignment to its optical axis to maintain preciseness, and an un-modified camera has three fixed support on its mirror box against CMOS frame to support and maintain its axis. CDS-600D II incorporates an adjustable ring in between the sealed chamber and lens mount ring for easy adjustment of misalignment changes like those similar method found in reflective mirror cell where user only need three knobs adjustment for connecting alignment. Adjusting ring for optical axis in an event of harsh condition also does not require disassembling of the mounting ring, and the ring itself is composed of high rigidity stainless steel that is not effected by varying temperature conditions.

Major factors of cooling performance are the heat-sink and cooling fans. Although there are several large size heat-sink units available in the market, most of them use heat pipe to maintain its varying temperatures, which is not appropriate for Astro-Imaging camera due to its big phase difference because they lead to the big difference in the cooling performance.

CDS-600D II adopted the high-efficiency, high-density aluminum 90x90mm Skiving fin heat sink. This is the largest heat-sink that is being used on all CDS models and it covers the biggest heatproof area.

The high efficiency silent cooling fan that supplies the constant air flow to the heat-sink is the 92mm cooling fan from an Austrian company Noctua, who is well known by the outstanding blade design empowering the silent and vibration free high-performance.

CDS-600D II and CDS-600D II Pro provide [eos lens adapter] basically and in addition to this other 3 ways to connect your OTAs.

First, Using 2” Nose piece you can connect this camera to 2” focuser tube of your OTA. We made  [M48 x 0.75p thread] and  [M52 x 0.75p thread] at the rear part of nose piece and you can install the 2” astronomical filters and 52mm photography filters. This will be very helpful when you are to take pictures using low profile newtonian telescope.

Second, Through [M72 x 0.75p thread] on the outside of EOS lens mount you can connect the camera to 3” focuser tube of your fast F ratio OTAs.

Third, Using T mount adapter ( back focus distance= 55mm) of CDS-600D II you can connect to Reducer or Field Flattener of OTAs. standard T (=M42 x 0.75p) and Wide-T(=M48 x 0.75p) thread is supported. This T-thread ring is united into one to Field Rotator and this system will help to set the good angle of the astro shots.

To See the Drawings -> 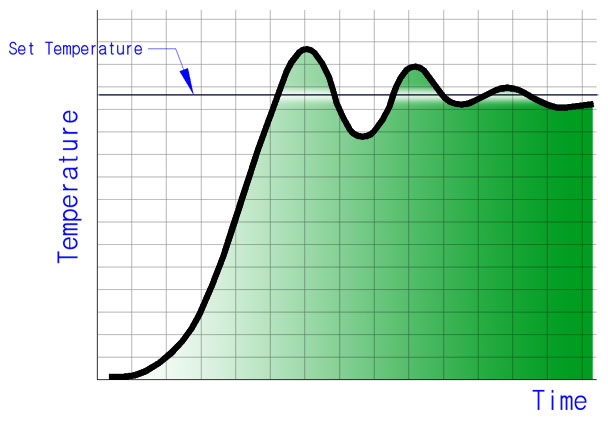 In order to control the temperature of the image sensor, CentralDS has developed a DTC-3 controller that manages electronic current output for Peltier module to control temperature. DTC-3 is high performance external controller device with the accuracy of +0.5~-0.5°C and is designed for easy use as well.  DTC-3 controller is optional item for CDS-600D II or CDS-600D II Pro and is designed to reach desired temperature at the shortest time possible. By enabling a user to control the temperature in detail with accuracy, a user can save the effort of taking the dark frame pictures every single time and can easily produce a high quality astro-image picture because a user can easily adjust the dark frame on the pictures taken previously at each temperature. 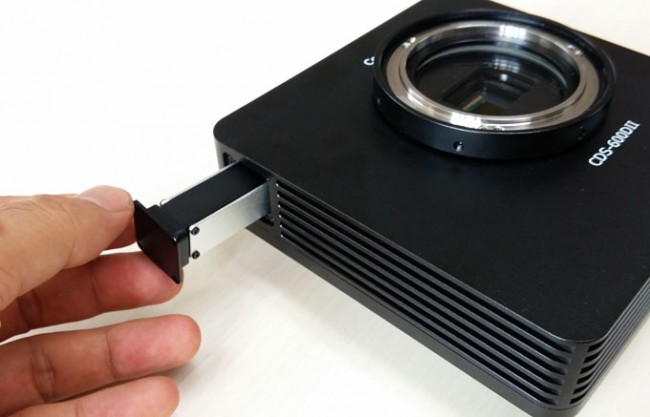 The heat transferred from hot side of TEC element make the housing of camera to warm state and it prevent dew condensation on exterior surface of camera. 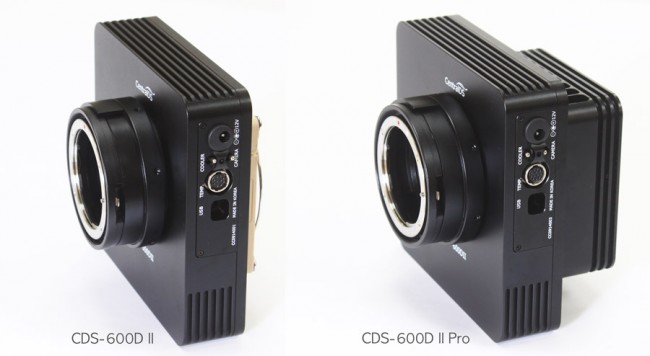 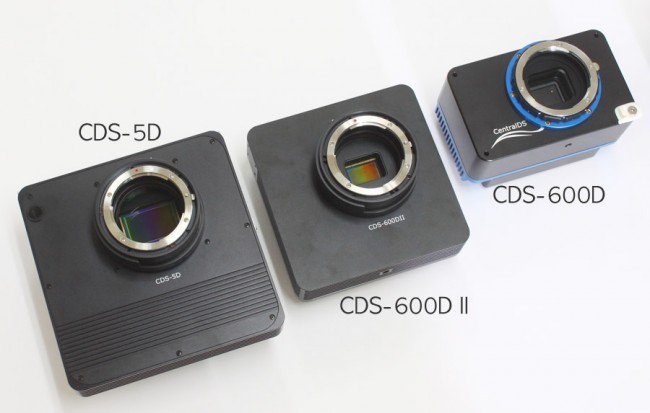 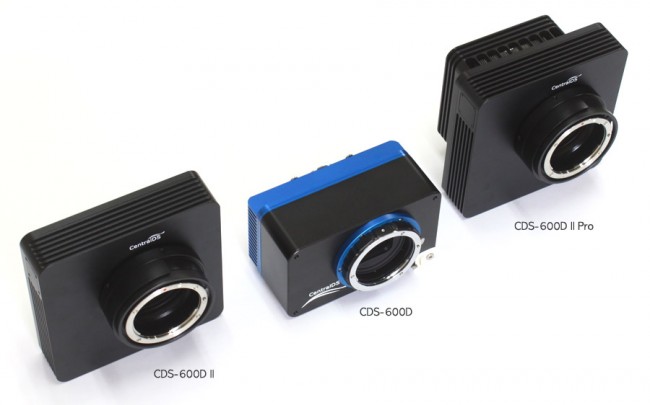 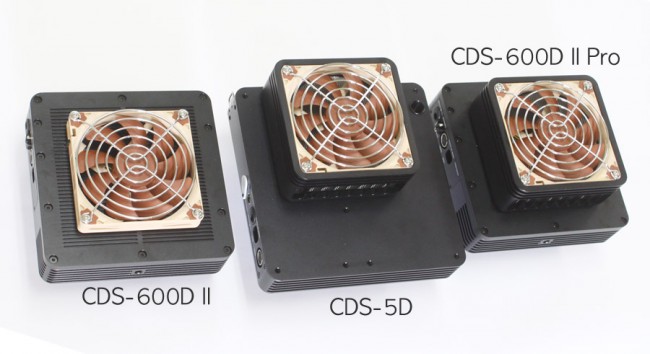